In the past, replacing an aging industrial control system was a daunting task for organizations – one that was costly, time consuming and disruptive.

Our automation engineering team knew there had to be a better way and set out to develop a tool that was more flexible and efficient. The result was our award-winning TEMPUS control system migration solution – a revolutionary technology developed in-house by a CIMA+ team led by David Findlay, Instrumentation and Controls Lead in our Calgary office.

Industrial control systems are large, sophisticated computers that are used in all types of operations – from oil and gas facilities to product distribution centres. As they age, these systems become outdated and need to be replaced.

“They start to become less reliable, and they have more risk of not functioning correctly,” explains David. “They also have more failures that create safety problems in the field for the operations team.”

Control system upgrades are especially difficult in plants with 24/7 operations. That’s because all traditional methods of system migration require some degree of system shutdown, which means a loss of production. TEMPUS offers a new approach.

With TEMPUS, we reimagined the entire control system migration process. By combining CIMA+ engineering services with custom hardware, the solution enables companies to perform hot cutovers of their control systems with the push of a button – and zero downtime.

“It’s definitely a solution that has the least amount of impact on the customer’s operations. It enables them to execute the project at a lower cost, with no loss of production and on a faster schedule,” says David.

“That’s why it’s a game-changer, because there’s been no other solution for that in the past,” he says.

In fact, a decade after its initial development, TEMPUS is still the only technology of its kind on the market.

A bridge between old and new

The TEMPUS solution acts as a bridge between the old control system and the new one, allowing a plant to keep running while the systems are switched over.

The process involves installing temporary hardware, called the TEMPUS module, to wire the old and new systems together. This ensures there’s no signal disruption during the switchover, unlike traditional approaches where signals are lost during the cutover – at least temporarily.

Our automation engineering services team then updates the plant’s customized computer software and conducts tests to make sure everything is 100% ready to take over once the new control system goes online.

“We can actually commission all of the new programming while the old system is controlling the plant,” explains David. “Then, with the press of button, we switch the signal path to the new control system.”

The patent-protected TEMPUS technology is especially useful to companies with operations that can’t be shut down.

David describes one project in particular where TEMPUS proved its value. It was a challenging migration project for an oil and gas client. One of its plants had three separate and outdated control systems that needed to be replaced with one integrated modern platform. To add to the complexity, these three systems couldn’t be shutdown even during a total plant outage because they supplied hot water for flushing and freeze protection.

Using the TEMPUS solution, our team executed the project without a hitch.

“TEMPUS enabled us to replace this aging control system that was a patchwork of three different platforms and migrate it to one consolidated platform with no loss of signals,” he says.

Before TEMPUS was an option, there was no other feasible path forward to upgrade the system. As a result, the client would have to continue running the facility on the patched together system and accept the inherent risks of obsolescence.

“In situations like these, a client’s only option was to resort to buying used parts from eBay, which would further reduce overall reliability,” explains David.

Customers have to see it to believe it

The TEMPUS technology is so revolutionary that David often has to convince customers that its capabilities are real.

“There’s a lot of scepticism from customers when we start talking to them about this technology because it pulls people out of what they think is possible.”

But when companies see how the technology works, they’re often relieved that they finally have a timely, cost effective and low-risk way to proceed with their control system migration projects.

He says companies that have previously struggled through projects done the traditional way often tell him they wish they’d known about the TEMPUS solution sooner.

The original idea for TEMPUS came during a control system migration project that ended up getting complicated.

“We decided that there had to be a better way to do it. We started coming up with some napkin sketches, and it snowballed from there,” explains David.

The robust technology is now a showpiece of CIMA+ innovation.

“I’m very proud of this technology,” says David. “It’s unique in the industry, and I think it offers high value to customers.”

David is also proud to be working with an engineering firm that nurtures and celebrates innovation. He says there is tremendous support for doing things better, finding inventive solutions and redefining what’s possible.

“CIMA+ is on the forefront of innovation. There’s a strong culture where everything we do within the company has some innovation to it.” 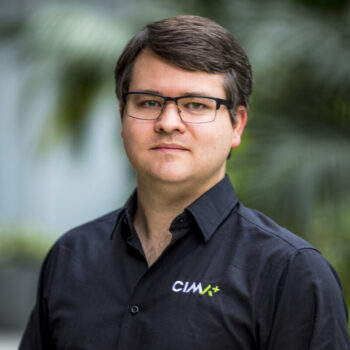 David is a Professional Technologist (P.Tech. Eng.) in the disciplines of electrical engineering and control system design. His focus has been on control system migrations of all kinds, including our in-house technology for online migrations.

As a Partner at CIMA+, David is responsible for the Instrumentation and Controls department in Alberta. He has worked in the Automation industry for over 17 years on a wide range of projects.