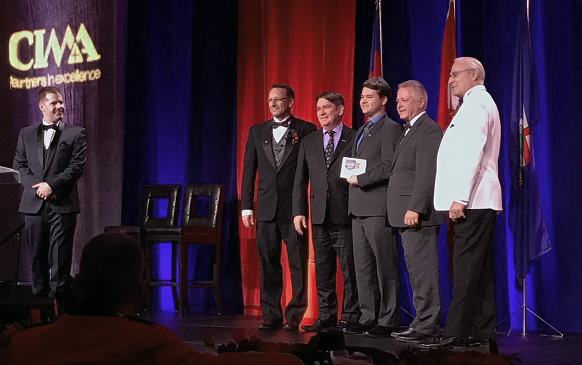 Laval and Edmonton, February 28, 2017 – We are pleased to announce that CIMA+ received an Award of Excellence in the Natural Resources, Mining and Industry category for its unique online migration system, TEMPUS. Granted by the Consulting Engineers of Alberta, the awards were given to the winners during the CEA Showcase Awards Gala, held on February 24th in Edmonton, Alberta.

“We are proud to see the efforts of David Findlay, Gerald Desrochers, and André Couturier being recognized by CEA. With TEMPUS, they have created and promoted an online tool that redefines control system migration standards. It is truly the embodiment of CIMA+’s ingenuity and commitment to excellence,” says Kelly Yuzdepski, Vice President, Western Canada at CIMA+.

One of the challenges the automation sector is currently facing is the replacement of aging control system infrastructure. All existing migration systems currently require some degree of taking the system offline, which means disrupting plant control. TEMPUS facilitates the live migration from one control system to another, without downtime. Once the new control system is operating the plant, the tool is removed, leaving a new and well-organized control system with no legacy equipment remaining.

Since 1996, Consulting Engineers of Alberta has recognized excellence in consulting engineering in Alberta and throughout the world at the CEA Showcase Awards. Project Awards are given for Excellence and Merit in fifteen categories.

CIMA+ is a Canadian, multidisciplinary firm that specializes in consulting engineering, project management, urban planning, communication systems, and the environment, allowing for a full range of services in urban infrastructure, transportation, buildings, industry, energy and hydroelectricity, telecommunications and geomatics. Founded in 1990, CIMA+ was created through the merger of several well-established consulting engineering firms that had accumulated over 30 years of experience. Today, with 40 offices across Canada and Africa, CIMA+ employs nearly 1,800 people, over half of whom share ownership in the company. CIMA+ has reached the prestigious Best Employers in Canada’s Platinum Level, which is exclusively reserved for organizations that achieved the best results in the Aon Hewitt survey. For more information on CIMA+, please visit https://www.cima.ca/.