A highly complex project from both a technical and traffic control perspective.

Designed for Québec’s harsh weather conditions, the laboratory tests performed on the seismic isolators for this overpass were a first in the province.

This project was part of the reconfiguration of the A‑73/A‑20 interchange aimed at improving access to the Exit 314 and A-20 East interchange from A-73 South. The new layout reduces the impact of construction on traffic, which stands at 35,000 users per day. More specifically, the construction work entailed the following:

Design of a curved overpass using a seismic isolator

The construction of this structure highlighted the expertise of CIMA+ engineers. With a total length of 331 m and a 270 m curve, this overpass required seismic isolators to be tested in a laboratory to verify their effectiveness at temperatures below -30 °C, a first in northern regions. Installed under the structure, the seismic isolators allow for overpass pillars to be dissociated from ground movements in the event of an earthquake. Their use also led to a reduction in costs and construction delays.

The bridge connecting Autoroute 73 North to Autoroute 20 East in Québec is considered to be a “relief bridge” with respect to its seismic design category. Consisting of a deck slab on steel beams, it comprises six spans totalling 318 m in length sitting on pilings anchored in bedrock with bored piers. The width of the deck ranges from 12.8 to 17.5 m, with a 270 m radius of curvature, creating a 67° angle of opening between the two ends of the bridge.

The specialized seismic analysis engineers at CIMA+ were given a mandate to create the earthquake-resistant design, taking seismic isolation into consideration as an earthquake mitigation measure. The main advantages of seismic isolation for this structure are that the foundation units are less expensive, the production schedule is shorter and bridge behaviour in the event of a major earthquake is improved.

The seismic behaviour of the bridge was analyzed using various techniques, including the Uniform Load, Multimodal Spectral, Static Thrust and Evolution Diagram (non-linear temporal analysis) methods. The behaviour of the isolated bridge was evaluated for different scenarios, and the results were used to size the foundation units and deck joints. The minimum and maximum exposure temperatures defined in the Canadian Highway Bridge Design Code were among the parameters that were considered.

The use of a textured elastomer seismic lead-core isolator in this project was advantageous for the client, particularly in terms of construction costs and production time, and facilitated operations thanks to the use of components with more standard dimensions. 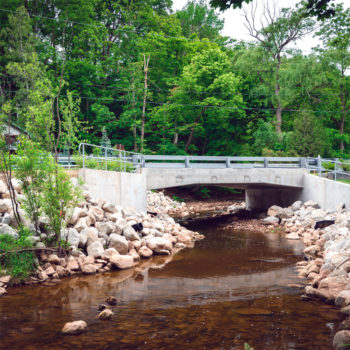 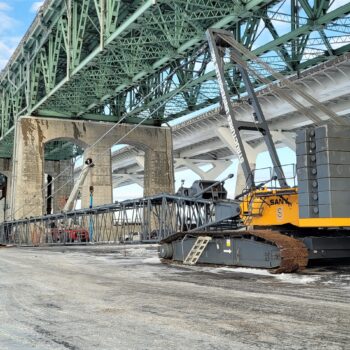 Deconstruction of the original Champlain Bridge 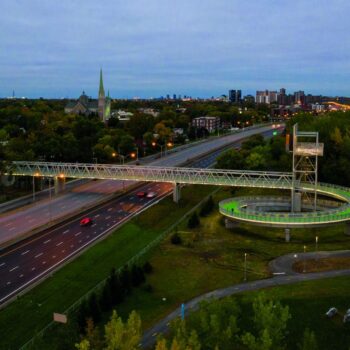 Reconstruction of the Normandy footbridge in Longueuil 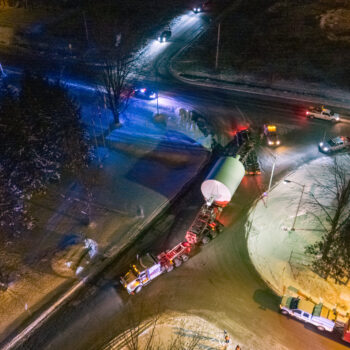 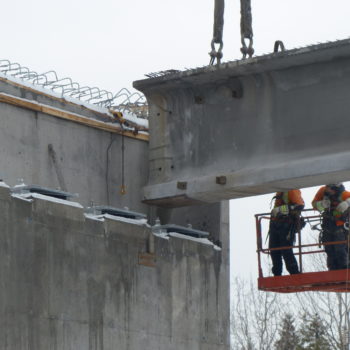 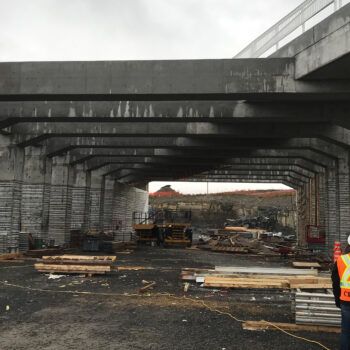 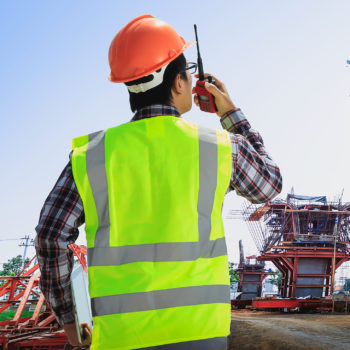